May LIVE Stand Up Comedy

The PERFECT night out with friends or a GREAT date night! Join us in the Tasting Room for a night of laughs!

Our May comedian is Julie Scoggins! As seen on LAST COMIC STANDING! And heard on Bob and Tom, John Boy and Billy and heard on the Blue Collar Comedy on XM/Sirius Radio! You can also find her regularly performing on Carnival Cruise ships!

Starting from humble beginnings of open mic nights in Charlotte NC, Julie has risen through the ranks of the industry to become one of the top acts for Carnival Cruise Lines and The Armed Forces Entertainment Group. She is a regular guest on major syndicated media shows like The Bob & Tom Show, John Boy & Billy, & XM/Sirius Blue Collar Radio.
Her career has brought her to TV also with spots on ABC, NBC, CBS and even a part on the Hit Show Last Comic Standing.
COME SEE HER LIVE IN SOUTHERN ILLINOIS! 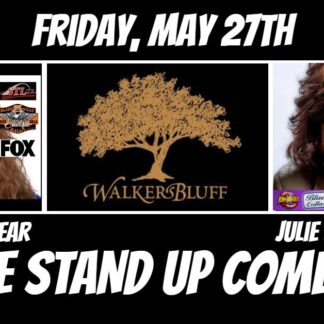 You're viewing: May LIVE Stand Up Comedy $12.00
Select options